By Tonja Dodd | News | No Comments

7 Sins Beer hallows National Beer Day. A day to savor Lust. A day to chug Greed. A day to imbibe in Wrath. These wickedly crafted brews are on tap at Sensory Winery in Ripley. Each style of beer was incomparably crafted by Bear, head beer demon.

Wrath is featured today. Wrath is an IPA, but do not be fooled, it’s not your typical MMO fighter pale ale. True to an IPA, brewed with strong hops, a bit bitter and with significant alcohol content, Wrath was also created with a smooth malty backbone and a crisp orange hop flavor, placing it in a league of its own. Swill this brew with your favorite cigar and experience a 7 Sins anticipated prize-winner.

Americans celebrate April 7, 2016 as National Beer Day. On this day eighty-three years ago President Franklin Roosevelt ended Prohibition signing a law that allowed Americans to brew and sell beer. Beer drinkers were jubilant as they could now purchase a cold one for the first time in thirteen years.

Beer is the rage – it is the most popular alcoholic libation and the third most common beverage of choice across the world, second to water and tea.

Raise a sinful glass with us… to FDR! (Do remember to drink responsibly.) 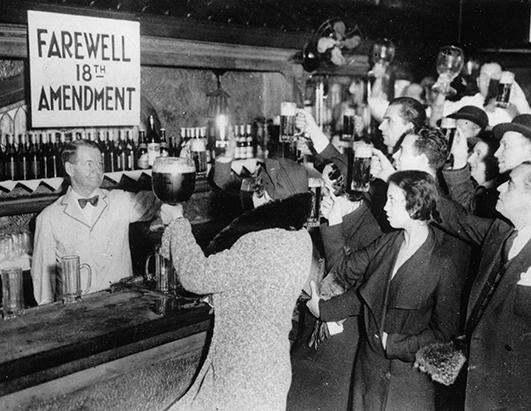 By Tonja Dodd | News | No Comments

From homebrew to craft-brew, by virtue of Alaska, 7 Sins Brewery beer demon, Bear, is stoked to be back home.

Seven is Bear’s lucky digit – he had been brewing beer at home – for his own hedonism – for just about 7 years when he stumbled upon Ripley’s 7 Sins in its embryonic stage. Instead of a formal interrogation, Bear crashed the beerhouse located behind Quincy Cellars and offered to do some homework for the crew. The gig became palpable when he arrived two days later with an encrypted thesis of methods and off the chain recipes in hand.

In Bear’s past life, he stood houses, hauled lumber and was a carpenter in places like sub-arctic Anchorage and Erie, Jamestown, Vermont and Ripley – but through studying, trial and error and copious nipping, he now brews a brutally wicked beer. He started honing his beer trade in Anchorage where beer is mighty expensive and in an effort to save a few bucks, decided to try brewing his own – after two tries and a twist or two, Bear had created his own method, making many cronies in a hurry.

Bear has taken his skills to 7 Sins and despite the sinful essence of the beer, he and the team create their concoctions using only pure ingredients and a process that reveres the craft of beer making. Bear stands strongly behind selecting primo hops and grains and using real flavoring vs. garbage (chemically fabricated ingredients and flavors). To top it off, 7 Sins doesn’t believe in a house yeast and proceeds with employing the tailor-made yeast per style of beer.

Come raise some Cain with the gang and experience your own 7 Sins immorality. Straightaway it is sold at Sensory Winery and Art Gallery – both pints and growlers of the regrettable craft are available. Local shows, restaurants, pubs, bars and clubs in WNY and NW PA are on deck.